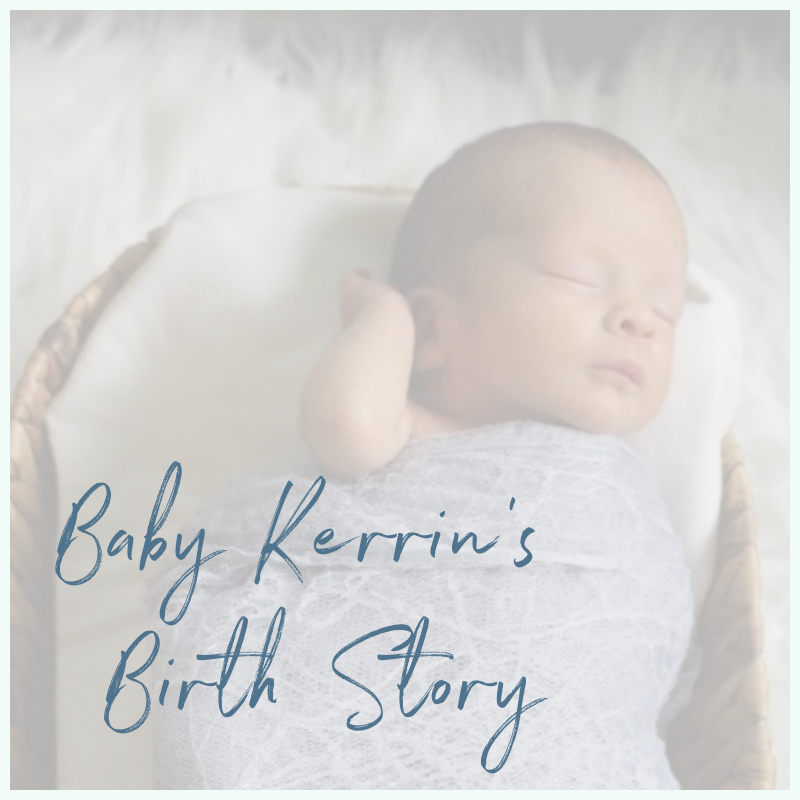 At 33+4weeks pregnant I woke up with painful back aches and contractions but none consistent enough to warrant going to the ER. Around 4am I went to the bathroom and there was a large amount of fluid, but because of all the bleeds I had had during the pregnancy the liquid was tainted with old blood and I figured it was just my body clearing itself out. I should have gone to the ER but after so many ER trips (4 during my pregnant due to heavy bleeding) I decided to just keep an eye on it myself. My wife pushed me to make an appointment with the OB for that day and get checked out just to be safe. The OB sent me to triage since she couldn’t run a strip test in her office to determine if the liquid was amniotic fluid, old blood, or just regular pregnancy discharge. I figured I would be sent home in 24 hours like every other time so I didn’t worry.

The ultrasound showed my water was low at a 4, normal is between 8 to 18. They also measured the baby and estimated his weight to be 3lbs 9oz. I was admitted due to low fluid and an IV was started.

That night in the hospital was miserable I was up all night in pain. I wasn’t allowed to get out of bed because of the low fluid. At 3am I called the nurse and asked her to please ask my OB if I could get out of bed and move. She said no contractions at all had registered on the monitor and was shocked I was so uncomfortable. Turns out the monitor was broken and nothing had registered since I was admitted. Thankfully the OB gave the ok for me to get out of bed. I started walking and swaying and doing whatever I could to ease the pain. Around 6am I had another leak, I called the nurse to do a strip test. 30 minutes later the result came back positive for amniotic fluid. My water had broken.

The OB came to see me Saturday morning, she said we had two options. Either get induced the next day on Sunday when I would be 34 weeks and she was on call. Or wait till Monday to see if my body went into labor on it’s own but the other OB on call would be delivering. We knew the other OB and knew she would without a doubt push for a C section, so we decided that Sunday I would get induced.

At 3:00am on Sunday I was 2cm dilated and pitocin was started at 5:00am. Contractions started slowly and I was able to use the peanut ball and a heating pad to get through them.

At 7:30am I was checked again and I was 4cm and 90% effaced. At this point my wife spoke with our doula and she headed out to us. Contractions were starting to get stronger, I had to close my eyes and give myself a pep talk to get through them.

At 8:30am our doula arrived. I remember looking up at her and asking her how her drive was, but a contraction started and I closed my eyes. She leaned down, stroked my hair and told me to breath slowly, relax my shoulders and gave me positive affirmations. At that moment she felt like my savior. All the fear and uncertainty washed away and I knew it would be ok, she was my security blanket and tears washed down my face with relief. She was there and I gave myself permission to let go of any fear or stress and pass it on to her. My only job now was to get through this.

I felt like I had no breaks between contractions. I had seconds before another one started. I sat on the labor ball and leaned forward with my arms on the bed. The OB came in and firmly said that she understood we were working through this but the baby monitor kept moving and she couldn’t get a good read on his heart beat. I tried to straighten my back during the next few contractions but it felt impossible. With each contraction I would curl forward to get through the pain. I then started feeling sick, dizzy and nauseous and told my wife and doula that I was going to throw up. There was a second where I wondered if I was in transition but in my mind there was no way. I had only just started laboring and it was too soon for me to be in transition. I threw up and kept laboring. My wife did her best to press the baby monitor to my midsection but we still couldn’t get a consistent reading on the monitor.

The doula suggested we break the bed down to a sitting position. Siting was excruciating so I used my hands to release the pressure and lift my bottom off the bed during contractions. The pain was excruciating and I started getting overwhelmed and desperate. I kept reminding myself that no matter how bad the contractions were this was only one day out of my life and I knew I could get through it.

I started feeling the urge to bunker down or press down with the next 3 contractions. I felt stretching and like something was pushing it’s way out. I didn’t believe the baby was coming yet since I was still thinking I was in the beginning stages of labor and had a long way to go.

I remember looking at my doula and saying “Is he coming?” A few seconds later the nurse and OB walked in. I heard the OB tell a nurse I was a first time mom and it was probably nothing so she would check me and then head out for the day. She checked me and I heard her say “oh we’re having this baby now”. The OB gave me some quick instruction on how to push, my first two pushes were ineffective and got nothing done.

Suddenly the OB started yelling that she needed more light, I heard her get on the phone and call for NICU to rush over. All the overhead lights were turned on and 20 people rushed into the room as I tried to keep my cool and concentrate. My doula put her hands over my eyes and tried to shield the light. She put her hands on either side of my face and said everything was fine. That he was coming and I needed to breathe. The OB looked at me with urgency and a face that told me things were serious and not going according to plan. “You need to push this baby out NOW” she said and I knew right then and there that something wasn’t right and I needed to get him out right away.

The room was packed with people and everyone was shouting different instructions at me. I took a deep breath, pushed with everything in me and gave it my all. In 2 pushes Baby Kerrin Ernesto was born, on 02-02-2020 at 10:36am weighing 5lbs on Superbowl Sunday.

I was later told the reason for all the bleeds was a blood clot that was slowly working it’s way between the placenta and uterine wall causing the placenta to slowly separate and bleed.

I expected a textbook pregnancy and instead got a high risk pregnancy but despite it all I still feel insanely lucky and I am so thankful for modern medicine and the amazing team I had around me. I’m so thankful to my OB and doula who always listened to me and made me feel so validated.